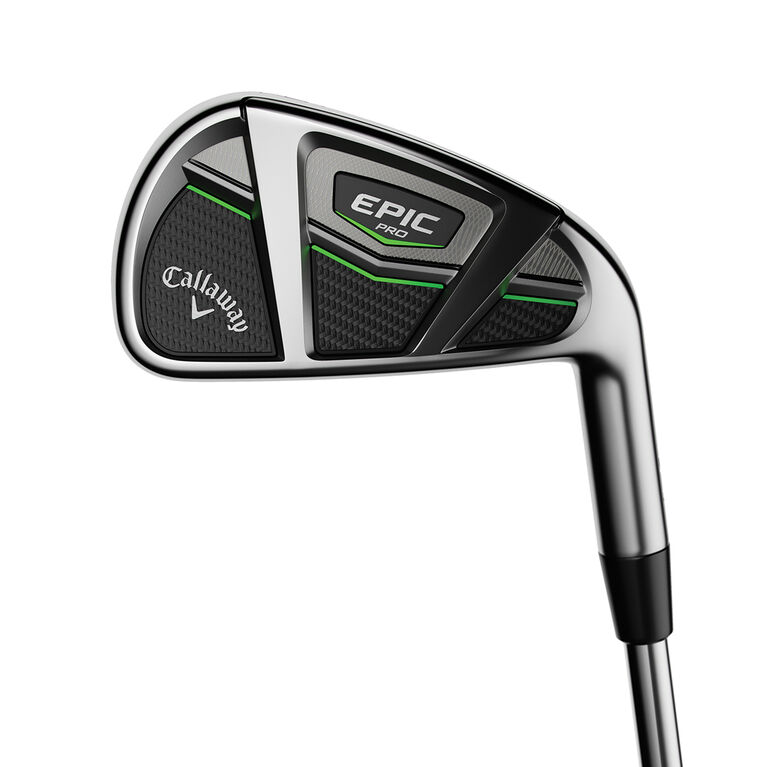 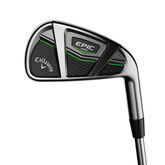 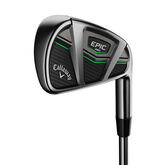 Callaway's head of R&D, Alan Hocknell, is a passionate golfer. A few years ago CEO Chip Brewer instructed him to create his "dream iron" - the iron Alan would design for himself. Chip imposed no limit on time, materials or cost. More than 70 people were enlisted to help determine what was needed and how to create it. Engineers, metallurgists, industrial designers, Tour pros, professional club fitters; all took part in conceptualizing, developing, refining, and testing.

Every Element and Dimension Assessed and Improved
Every element and dimension of an iron was assessed - overall shape, face size, face thickness, cavity shape, sole, topline, CG location, hosel, shaft. Impact dynamics, including the synergies of how each part supported or hindered each other, were painstakingly scrutinized. All to eke out a superior and more pleasing combination of distance, control, forgiveness and feel. The result is the Epic and Epic Pro irons, both offering the best performance package in an iron in Callaway history.

Better 360 Face Cup
The ultra-thin, ultra-fast face is turbocharged by an improved 360 Face Cup architecture that reduces the rim thickness to 1mm at its thinnest point. That allows the rim to flex more readily, consistently and at greater speed. That increases ball speed for more distance, and give you more ball speed on impact toward the toe, toward the heel, high up and especially down low - the most common mis-hit. The result is more distance on nearly every swing.

Fundamental Changes to Internal Standing Wave
Inside the head, fundamental changes were made to Callaway's Internal Standing Wave technology, a weighting method that affects launch, spin and feel. In simple terms, the ISW is a flat, asymmetrically shaped piece of metal that helps pinpoint CG location to promote optimum launch and spin in each head, and helps control vibration to promote unique feel. In this case, ISW consists of a specially shaped piece of MIM'ed tungsten. MIM'ed stands for Metal-Injected Molding, an injecting-molding process that uses finely powdered metal to create intricately shaped parts with tremendous precision. Parts spend up to 41 hours of furnace-time at temperatures up to 2500 degrees Fahrenheit to fuse the powder into a solid piece. MIM'ed tungsten allows a new combination of size, shape and weight for the ISW, allowing us to precisely position the CG location differently in each individual iron. Extremely low in the long-irons to promote easier launch and high, long flight; and progressively higher as loft increases to promote a lower flight in the short-irons for added control; and a balance of easy launch and control in the middle-irons.

More Irons at the COR Limit for More Distance Through the Set
We made equally significant improvements to the clubhead's Exo-Cage construction. (This is the second Callaway iron to employ Exo-Cage. The first, Big Bertha OS, was the only iron to earn five stars in every category of the 2017 Golf Digest Hot List.) In Epic, we incorporated a high-grade steel structure into the center of the cavity to add strength and stiffens the body, especially the topline and sole, so that the face can take on more impact load. The term for this is "energy lensing." In Epic irons, energy lensing raises the efficiency level of the face to promote faster ball speed and distance. That, combined with face thicknesses finished to a tolerance of 1/1000th of an inch, helped us elevate the COR right up close to USGA limit of .830 COR in the 3-iron through 7-iron. It's the first time we've had so many irons in a single set bump up against the COR limit.

Each clubhead component is precision-milled and robotically laser-welded for maximum integrity and cohesion between parts. It takes 65 days and more than 200 processes, steps and inspections are required to create each head.

Epic Pro Irons
Epic Pro irons share all the same material and technological advancements, but in a more compact head with a thinner topline and sole and less offset -- qualities that make it slightly less forgiving but significantly more workable, a trade many better players are willing to make. That said, Epic Pro boasts our best-ever overall performance package of distance, workability and forgiveness in a player's iron.
https://www.pgatoursuperstore.com/cart
2743d9b339a76c53e66525ba05
0.0
0.0
0.0
0.0
0.0
USD