Pickleball: The Fastest Growing Sport You Never Heard Of

Pickleball, at its core, is a fun and exciting indoor/outdoor sport that combines elements of tennis, badminton, and ping pong. Pickleball is played on a court the size of a badminton court, with a low net similar to tennis, and with what looks like an oversized ping pong paddle and a wiffleball.

Why is It Called Pickleball?

According to the U.S.A. Pickleball Association, the origins of the name pickleball differs between different accounts.

As the first story goes, Joel Pritchard’s wife, Joan, started to call their newly invented game pickleball because “the combination of different sports reminded me of the pickle boat in crew where oarsmen were chosen from the leftovers of other boats.” But there’s another story of how it got its name. According to Barney McCallum, the game pickleball was named after Pritchard’s dog, Pickles! Despite the sour taste of actual pickles, the dog was sweet and used to run off with the ball while they were still playing the game!

In order to play pickleball only some basic equipment is needed. Players will need a pickleball paddle and one pickleball ball. It is played on a court the size of a badminton court with a low net around the height of tennis court net.

The paddles needed to play pickleball are larger than table tennis paddles, but smaller than a normal tennis racket. Pickleball paddles or pickleball racquets can be made from many different materials, from wood and graphite, to aluminum and other composite materials.

How to Choose a Pickleball Paddle

Choosing a pickleball paddle or pickleball racquet can be overwhelming. You will likely want to consider a few things when making your choice – Price, Weight and Grip Size.

Grip Size – Most pickleball grip sizes are between 4-4.5 inches in circumference. This is an area where you may have to try them out in a retail store. A larger grip may make the pickleball paddle slip in your hand so if you are deciding between 2 sizes you may want to opt for the smaller grip size. Smaller grips allow for better wrist action which provides you with more control.

Outdoor pickleballs are made of a firmer material and has approximately 40 smaller holes on the surface. With more holes, the outdoor ball can ‘cut thru the wind and fly a bit faster’ hence they are better for a more seasoned player.

Make sure you purchase the right pickleball to use depending on indoor or outdoor use. If you’d like to play with an official pickleball ball, check out the USAPA’s guidelines.

The layout of a pickleball court is essentially the opposite of a tennis court, with a few dimensional variations. The two blocks on either side of the net are called the “no-volley zones,” but they are commonly referred to as the “kitchen.” If you are standing inside this area, you must let the ball bounce before you hit it. This is more of a safety precaution than anything, since it could be dangerous to smash a volley out of the air at such close quarters. 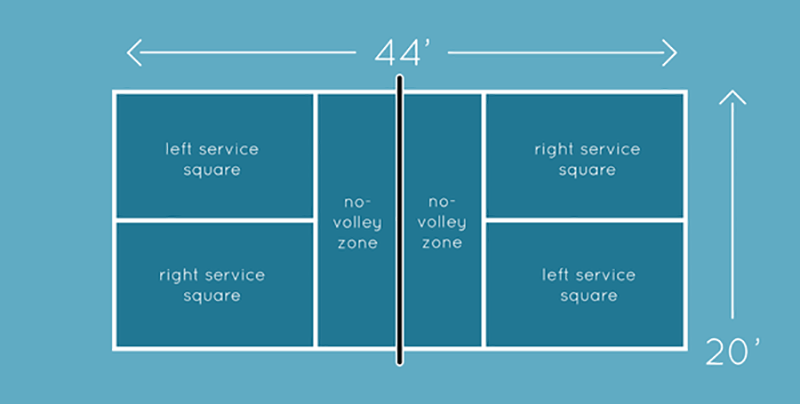